The 2018 Küstendorf International Film and Music Festival is coming in January and we are now open for film submissions.

Our Competition Programme showcases short films and is open to filmmakers around the world. The only limit is runtime. As long as your film is under 45 minutes, fill in the application form, include a streaming link and send it to kustendorffestival@gmail.com.

Here is the application form.

Selected films will compete for Festival prizes and their authors will be invited to take part in Festival programmes from 15 to 21 January. 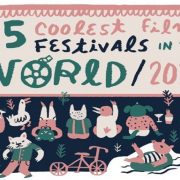 Kustendorf International FIlm and Music Festival has for the second time been included in MovieMaker Magazine annual list of the 25 Coolest Film Festival in the World. This list is decided by the magazine’s own “panel of cool”, a party of eight that includes filmmakers, film festival programmers, producers and publicist, who are invited to evaluate their experience with film festivals in terms of coolness.

This years list includes a variety of festivals that range from well-known film carnivals that attract thousands of film aficionados to some more obscure festivities that might be unknown to even the most relentless festival goers out there. Drvengrad-based festival has found it’s place in a catalogue of places that stretches from Jerome, Arizona to Jeonju, South Korea, and from Artic Circle to  the Carribean coast of Columbia with the following description:

At Küstendorf, time stops. You are absorbed with watching incredible international films, partying relentlessly, and listening to film masters tell their stories. Serbian auteur and two-time Palme d’Or-winner Emir Kusturica presides over the party, drawing in cinema luminaries like Johnny Depp, Alfonso Cuaron and Andrei Konchalovsky for retrospectives and open panel discussions. With a focus on awarding new international talent, the fest is the perfect venue for the next generation of student filmmakers.

Check out the full list over at the MovieMaker. 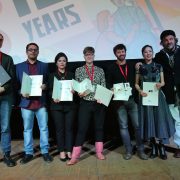 The final day of the Tenth International Film and Music Festival Küstendorf wrapped up with a closing ceremony held at the Damned Yard theatre in Mećavnik.

Folklore ensemble Svetozar Marković from Kragujevac opened the ceremony with their performance.

Professor Emir Kusturica then presented the diplomas to the participants of the Festival. The juries were then welcomed on stage to present the Festival awards – Golden, Silver and Bronze Eggs and Vilko Filač Award.

Professor Emir Kusturica introduced a new award at the Festival – Award for Most Poetic Film, which went to the Bulgarian director Nikolay Todorov for the film Before I Sleep. He also mentioned two other films from the competition programme that left a very strong impression on him – Freeze by Nelicia Low and Frontier, Bloody Frontier by Saša Karanović.

Vilko Filač Award for best cinematography, decided by Michel Amathieu and István Borbás, was given to Andrei Maika for the film The First. In his reasoning behind the award, István Borbás said that this was “a film where the cinematography gives the best harmony between visuals and the message of the film. A film which has visual poetry. A work that dispenses of artificial attitudes and shows very strong technical knowledge.”

Finally, the Festival jury, including Geling Yan, jury president, and Christian Valsamidis and Nikola Ležaić as members, awarded the Golden, Silver and Bronze Eggs. Nikola Ležaić also called the name of the Bronze Egg winner – Matteo Gariglio for En la Boca, saying that it was “always playing on the thin line between fiction and documentary, with an incredible attention to detail.”

Geling Yan, jury president, awarded Silver Egg to Tone Ottille for Lulu IRL, saying that “its success lies in depicting the lonely and defiant heart of a young girl hunting in an extra dimension of reality, the Internet, for love and sympathy that our three-dimensional universe has failed to produce.

The Golden Egg went to Michael Alalu for The Thorn, and the jury president said that “with its flawless narration and unique character development, The Thorn makes it possible for us to understand the absurdity and beauty of human feelings.”

Finally, Professor Emir Kusturica announced the closing of the Festival. 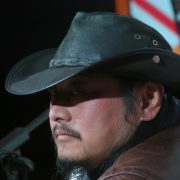 After the screening of Soul on a String, the film’s director Zhang Yang had a talk with the young colleagues in the Damned Yard Theatre.

At the start, he spoke about Tibetan mythology and said that the folklore jewelry, which had a prominent role in the film, was given magical function, so these rocks became talismans, stone and iron from the sky.

Answering the moderator’s question about tackling time in the film, Zhang said that the film was based on a novel about a writer who was looking for his main character, and another shorter novel. These two stories are intertwined in such a way that it is not always easy to define the time frame – whether it is the past, the present or the future of the characters. He added that this kind of setting was supported by the fact that the people in Tibet even now wore old clothes, from the past.

Zhang said that Soul on a String was made in typical production circumstances for China, with a standard crew of 130 people.

When his film was compared to the work of Alejandro Jodorwsky, Zhang Yang said that, as with the Chilean author, this film depicted a spiritual journey. He added that the beginning and the ending of the film were connected just like reincarnation cycles were connected in religion, and that he wanted to achieve a different relationship between the causes and the consequences of events in the story.

In the end, Zhang said that his film used Western genre as a disguise for the story about a spiritual journey and that the scenery inspired him for selecting the particular film language. 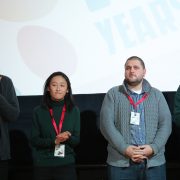 On the last night of screenings within the Competition Programme, the audience saw the remaining films by young filmmakers. Before the screening, the young directors were greeted by the audience and welcomed on stage.

Members of the jury for the Vilko Filač Award and Festival awards jury were also greeted by the audience. 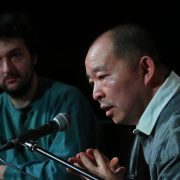 After the screening of De Lan as part of the Contemporary Trends, the film’s director Liu Jie held a workshop with the students and Festival guests.

Answering why he set the story in the autonomous region Tibet, he said that he had a connection to this province, that it had beautiful scenery and that many different ethnic groups lived there.

The author said that the majority of the cast were non-professional actors, and that the costumes were authentic, including the depiction of the way of life which had not changed since the eighties to date. He said that the main actor was from Beijing, and that he had spent two months in the province, while the main actress was originally from the area, but she studied in Beijing. Other cast members were from the area where the film was made.

The director said that the great majority of contemporary Chinese films were Hollywood-style blockbusters abounding in CGI, so he wanted to make an artistic film which would teach the people in China more about minorities. He wanted his films to influence people and document the reality of modern China.

The leading actor is an introvert throughout the whole film, and shows emotions only in the end. This was because he did not dare to do anything, despite his love for De Lan and the fact that he in a way found a new family.

Liu Jie also told an anecdote concerning the cinematographer from Germany who he worked with on this film. The greatest difficulty during the shooting was lack of oxygen, because they filmed on an altitude of around 5000 m. On top of that, the DOP was a vegetarian and they had a problem with food, since people mostly ate meet there, and fruit and vegetables were scarce. Often, while filming, the director would postpone the cut so that the actors would look genuinely tired. On one occasion, the director and the cinematographer, carrying a monitor and camera, followed the actors and filmed. Finally, the director was so tired that he plugged out the cables and sat on the ground, while the cinematographer continued following the actors, until they completely left Liu Jie’s field of view. 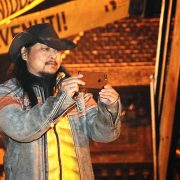 Zhang Yang, Chinese film director and screenwriter, arrived on the fourth day of the Festival. He was welcomed with the traditional offering of bread, salt and honey brandy.

This is the director’s first time at Küstendorf. His latest film, Soul on a String, which premiered in competition at the Shanghai International Film Festival 2016 and received the Best Cinematography award, will be screened as part of the Contemporary Trends Programme. 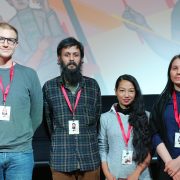 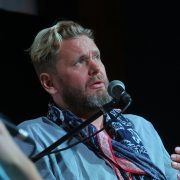 After the screening of Antti Jokinen’s Flowers of Evil, the Finnish director had a talk with the young filmmakers in the Damned Yard Theatre.

Jokinen said that the his country was both a welfare state and a country with a very high unemployment rate among the young people. This is the social setting of the film.

He said all the young actors in the cast of Flowers of Evil were non-professional actors and that he had chosen them at a casting among more than 500 young people, to accurately portray life in the suburbs of Helsinki. Jokinen said it was important for him to have the cast before writing the script, because as he writes he looks at the photos of the actors on his wall. He wrote Flowers of Evil having his eye on a young rap artist from Helsinki for the role of Juno.

Answering the question about the music in the film, Jokinen said that the punk band Exploited let him to use the music free of charge, asking for just a case of Finnish beer.

Talking about filming with digital technology, Jokinen said that it made two things possible – today, anyone can make a film and everyone can see that it is not easy to make a good film. So, owing to digital technology, the role of the director became more prominent.

As for the editing of his film, Jokinen said that the fast change of short shots made Flowers of Evil stand out from his other films, because he made a film about hysteria, a film which is at the same time a dystopia and a commentary on the state of the Finnish society. 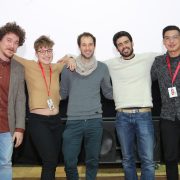