Fred and Mick, two old friends approaching their eighties, are enjoying a vacation in a lovely hotel in the foothills of the Alps. Fred, a retired composer and conductor, has no intention of returning to his music career which he dropped a long time ago, while Mick, a director, is still working, hurrying to finish the screenplay of his latest film. Both friends know that their days are numbered and decide to face their future together. But unlike them, no one else seems worried about the passing of time. 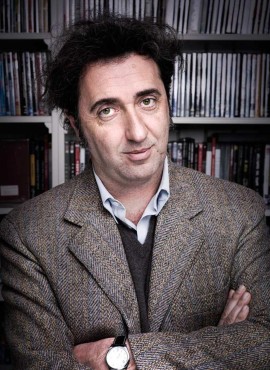 Paolo Sorrentino was born in Naples in 1970. At the start of his career, he shot a number of short fiction films and he wrote a script for a long feature, The Dust of Naples. His first feature was One Man Up (2001) which was screened at the film festival in Venice. This film also marked the beginning of his cooperation with actor Toni Servillo who has since become Sorrentino’s frequent collaborator. A psychological thriller about a lonely businessman who falls prey to mafia, The Consequence of Love (2004), was nominated for Palme d’Or in Cannes. So was The Family Friend (2006). His next film was Il Divo (2006), a biographical story about Giulio Andreotti in which Toni Servillo plays the role of the controversial Italian prime minister. The film won the Jury Award at the festival in Cannes. Sorrentino’s next movie, This Must Be The Place (2011), won the Ecumenical Jury Award at the same festival. Sorrentino’s latest film, The Great Beauty (2013), another project with Toni Servillo, was also screened at the Cannes festival, and went to win the American Film Academy Award for Best Foreign Language Film. Paolo Sorentino’s latest movie Youth (2015) won three European Film Awards, including the one for best film.