On 4 August 1983, Thomas Sankara becomes the president of Upper Volta after a coup d’état. A year later, he definitively creates a turning point in the history and identity of his country, renaming it Burkina Faso, which literally translates as “Land of Upright Men”.

He brings enormous hope to a great portion of African youth far beyond the boundaries of his country. By conducting a “democratic and popular” revolution, he brings more progress to the people during the four years of his presidency than half a century of the French colonial rule.

His liberation policy for Burkina Faso promotes food autonomy in particular, causing him to radically oppose all forms of imperialist or neo-colonial influence, and making him an inflexible voice against those in power at that time.

Sankara attempted a thorough reform of a civil society that he considered as being frozen in a feudal model. He struggled against inequalities between men and women, illiteracy, corruption, civil servants’ privileges, etc. He constantly encouraged the Burkinabé people to take the reigns of their own destiny into their own hands by making them participate in the fight against malnutrition, thirst and contagious diseases.

However, despite the obvious success and popularity of his revolution, Sankara faces hidden challengers. He is brutally murdered on 15 October, 1987 in a coup d’etat which is believed to have been organized by Blaise Compaoré, the man whom he considered a brother and who is still president of Burkina Faso today. The new regime then attempts to wipe out the memory of these four years of Sankara’s presidency.

Blending together rare and meticulously assembled archives, director Christophe Cupelin offers a panoramic vision of the intellectual and political inheritance of this atypical head of state. Giving his documentary the energy of a punk manifesto, between idealism and irony, he faithfully restitutes the originality of a president as striking in his action as in his words.

In 2012, twenty-five years after his tragic and still not officially elucidated death, the film offers an opportunity to see and listen to the voice of one of the most important African leaders of the 20th century. 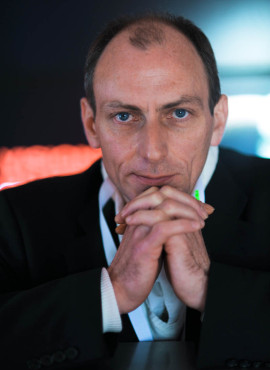 Christophe Cupelin. Born in Geneva in 1966. Swiss. Graduates from the Ecole Supérieure d’Art Visuel of Geneva in 1993, cinema and video option. Person in charge for the Spoutnik Cinéma in Geneva from 1991 to 1994, programmer till 1998. Co-founder of Laïka Films in 1993. Has been travelling to Burkina Faso and Africa since 1985.