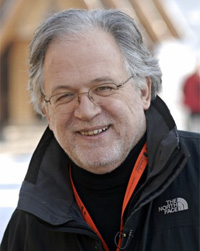 Karl Baumgartner, the German film producer and distributor, died at his home in Frankfurt on Tuesday, at 65 years of age. He was one of the most important European producers and a pioneer of international co-productions.

Karl Baumgartner was born in South Tyrol town of Brunico. His film career began in the late sixties in Rome, where he worked as an assistant director and a film critic. Then in 1971, along with Reinhard Brundingom in Frankfurt founded famous Harmonie cinema, with a repertoire dedicated to art-house films. Same duo founded Pandora film distribution company in 1981, offering German audiences films like Yilmaz Guney’s Yol and nostalgia Andrei Tarkovsky’s Nostalghia.
As a producer, he  the authors of recognizable cinematic expression. He has collaborated with some of the most important directors of our time , with Emir Kusturica, Kim Ki – Duk and Aki Kaurismäki . At the same time, he also worked with debutants , unrecognized authors and was particularly interested in Eastern European cinema. With Emir Kusturica has worked on films Underground, Black Cat White Cat, and Super 8 Stories.

Baumgartner has been a guest of the Kustendorf International Film and Music Festival twice. On Kustendorf 2009 he was a member of the jury and also held a workshop with the students. On this occasion, Emir Kusturica announced him as  ” … a rare and precious type in the world producers. Unlike people who care only how to get the money, and even more so to return the investment, Baumi shares the life and  fate of  film .”

In addition to the numerous awards that he won in person, and those awarded to the films he produced, Karl Baumgartner was a member of the European, Asian and German Film Academies. Festival Küstendorf and production company Rasta have lost a dear friend and invaluable associate.