After his 65th birthday, Jep Gambardella, a writer of a single novel and a Roman bon vivant, will seek a deeper meaning of his life which has turned into an endless series of luxurious parties for members of high society, bizarre art performances and cynical drawing room discussions. Recalling his own age of innocence, Jep rediscovers beauty in the city scenery and in the society surrounding him, beauty in totally unexpected situations, places and peoples. On this journey, he meets a series of characters, among whom are a former husband of his ex-lover, a striptease dancer on the verge of a nervous breakdown, and even a living saint.
Like Dante’s Virgil and Beatrice, Sorrentino’s Jep Gambardella acts as a guide through landscapes of the city of Rome unknown to mere mortals as well as high society in it. It is not altogether clear which area of Dante’s trilogy we travel. 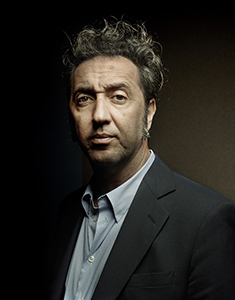 Paolo Sorrentino is an Italian director and screenwriter. He was born in Naples in 1970. In the beginning of his career, he shot a number of short fiction films and he wrote a script for a long feature, Polvere di Napoli (The Dust of Naples). His first feature was One Man Up (2001) which was screened at the film festival in Venice. This film also marked the beginning of his cooperation with actor Toni Servillo who has since become Sorrentino’s frequent collaborator. A psychological thriller about a lonely businessman who falls prey to mafia, The Consequence of Love (2004), was nominated for Palme d’Or in Cannes. So was The Family Friend (2006). His next film was Il Divo (2006), a biographical story about Giulio Andreotti in which Toni Servillo plays the role of the controversial Italian prime minister. The film won the Jury Award at the festival in Cannes. Sorrentino’s next movie, This Must Be The Place (2011), which borrowed its title from a song by the US band, Talking Heads, won the Ecumenical Jury Award at the same festival. A singer from the band, David Byrne, composed music for the film, together with Will Oldham. Sorrentino’s latest film, The Great Beauty (2013), another project with Toni Servillo, was also screened at the Cannes festival. As an Italy’s candidate, the film is also shorlisted for the Academy Award for Best Foreign Language Film.