Sergei, a police major from a small town in a Russian province, is rushing to the hospital because his wife is in labour. Driving too fast, he doesn’t stop in time when a young boy crossing the street appears, and kills him in front of his mother’s eyes. The major instantly reacts, locking the shocked woman in his car and calling his colleague, Police Officer Kroshunov. Kroshunov tries to help by altering the police report and tricking the mother into drinking alcohol before giving her an alcohol test. The situation spins out of control when the parents refuse to sign the false report and local power players decide to cover it up. Major Sergei, faced with a frightening spiral of events that he initiated, will confront the service he belongs to. In the timespan of one day, Yuri Bykov’s movie places his tragic hero face to face with the world that he had lived with until that day. 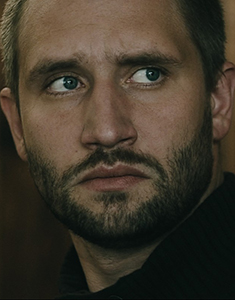 Yuri Bykov is a Russian director, scriptwriter and actor. He was born in a working class family in Novomichurinsk in 1981. He studied acting at The Gerasimov Institute of Cinematography (VGIK) after which he performed in Moscow theaters. Since 2006, he has written scripts and directed short films. One of them, The Boss (2009), in which he also played the main role, won the best film award at Kinotavr, the Sochi Open Russian Film Festival. Bykov’s first feature is Live! (2010). His second film, The Major (2013) is a serious drama for which Bykov composed music,  played the main role, and wrote the script and edited it. The film was proclaimed the best picture at the festival in Shanghai and was also screened at the Cannes festival in the prestigious program, International Critics’ Week.