The film tells about a small museum, where the economic boom has not yet arrived. It appears as if time has stopped in this national museum, a museum which should serve as a show window for Slovakia. Stuffed animals are covered with dust and the three employees working as caretakers of the huge building look like the museum exhibits themselves. 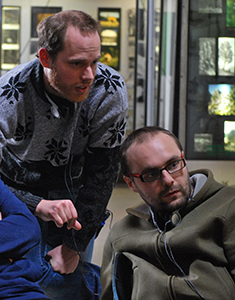 Andrej Kolencik (1984, Bratislava) is a Slovak film director and visual artist. He graduated from the Department of Animation at the Academy of Performing Arts in Bratislava. He makes films, animations and music videos. His debut documentary film Hviezda (2012) is now presented at international festivals. The Exhibition (2013) is his first fictional film.