The Film Museum in Łódź invites you to participate in the exhibition KRZYSZTOF KIEŚLOWSKI SIGNS AND MEMORY arranged to commemorate one of the most famous polish directors Krzysztof Kieślowski (1941-1996).

This is a biographical, retrospective exhibition documenting the whole of the artistic and personal life of the director. This multimedia exhibition fulfills the need for the full understanding of a man who, while regarded as a pessimist, gave the cinema and its enthusiasts hope: who aspired to independence and.... peace, incessantly threw down challenges to himself, the system in which he was caught and cinema and contemporary culture.

According to the curators, the exhibition is a reflection of the chronology of events but with а strong emphasis on the most important aspects of the "life passage" of the director. Using photographs and press cuttings, posters, reviews, catalogues and numerous publications as well as newly presented archival material containing important statements by Kieślowski, showing him while making his films (for example on the sets of Scars, The Ten Commandments, Three Colours) at festivals and in important discussions and meetings.

Materials for the exhibition have been provided by: Maria Kieślowska, Marta Kieślowska, Zbigniew Preisner, Krzysztof Piesiewicz, Irena Strzałkowska, Yola Czaderska-Hayek, MK2 Productions the producer of "Three Colours", The European Academy of Film, The National Film Library, The Polish Film Promotion Agency, PWSFTviT in Łódź (The Film School), The Łódź Museum of Cinematography and others.

The exhibition was made in cooperation with the Film Studio TOR, Skorpion Editions, Polish Institut in Dusseldorf, Polish Film Institute Warsaw. 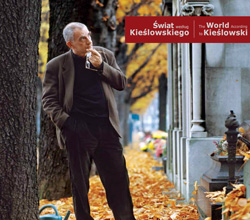 Krzysztof Kieslowski, one of the most influential and prominent Polish directors, was born in 1941 in Warsaw. After finishing Łódź Film School, Kieslowski started his director career by filming documentary and television films. Developing a specific style, by which he was later recognized, Kieslowski's interests in the beginning were the themes of everyday lives in communist Poland and ordinary people’s problems. In the ‘70s he directed some outstanding documentaries such as Workers '71: Nothing About Us Without Us (1971), The Bricklayer (1973), Curriculum Vitae (1975) and Hospital (1976). They elaborate on social and moral themes of Polish society of that period, and because of this, he was confronted with censorship and disapproval by the establishment for the first time. Realism and precise film language marking his documentaries he later used also in feature films, which allowed him a greater freedom of expression and brought international success.