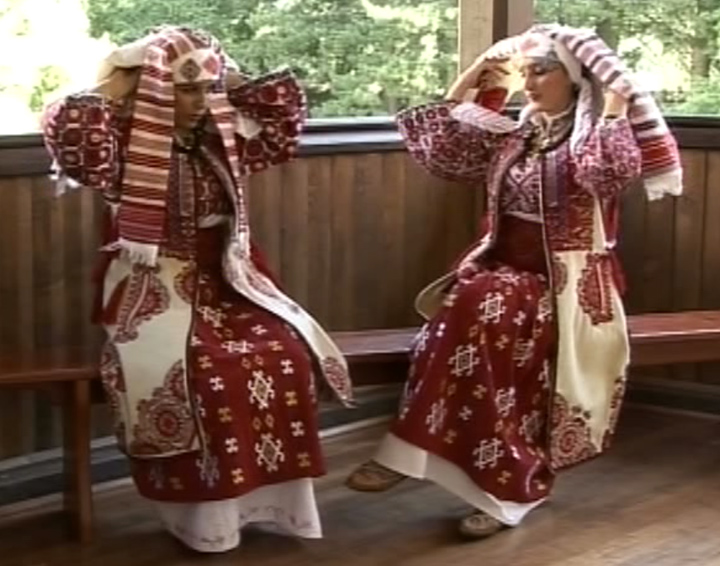 The 2013 Kustendorf International Film and Music Festival presents an exhibition of FOLK COSTUMES FROM KOSOVO AND METOHIJA in collaboration with the Sava Dečanac Cultural Center and the Kopaonik Cultural Artistic Society from Leposavić.

Kosovo and Metohija is the cradle of the medieval Serbian state and spirituality and is the ground on which a variety of cultural influences crossed and met. The traditional wear that was formed in this region is distinguished by the richness and beauty of its material, shape, and decorations as well as its delicate production.

One of the main characteristics of the dress from the Kosovo-Metohija region is the shirt. In all areas, in both male and female wear, the straight-cut, long-sleeved, cloth tunic is the basic upper and lower robe. It originated in the ancient times and was used by the Illyrians, Dacians, and Slavs. It is of uniform width almost everywhere with one or two side pegs. In the Raska - Metohija area, the shirt was developed into a bell-shaped garment with more inserted pegs – of which there can be up to twenty in bridal wear. In this shape, with rich embroidery and decoration, they are clear reflections of the medieval fabric of Serbian aristocratic attire. The main characteristic of this costumes is the traditional use of the same types of homemade materials – primarily hemp, linen, and cotton cloths, white textiles, wool and cotton fabrics often with woven stripes and tightly arranged geometrics ornaments, as well as refined and unrefined leather. One of the main aspects of this dress is the embroidery. The embroidery is perfectly applied with a sharp sense for connecting various geometric shapes and styled floral ornaments, and is traditionally placed on the most visible parts – the arms, the chest, the collar, and the edges of the shirt. The embroidered motifs are most often free though there are some with a filled background. Various shades of red wool yarn are usually used to embroider. The embroidery is completed with beads, sequins, and tassels.

A skirt of two horizontally connected halves – pleated and open throughout the entire length, also defines the female traditional costumes. It was equally worn by brides and married women. The skirt comes in two main forms: the short skirt - or zaprega, narbranica, bokča, boščca, bojče - that covers only the hips and reaches the knees and is decorated with woven geometric designs and the long skirt made of striped fabric which reaches almost to the edge of the shirt. This long skirt is also called the futa, futara, guta, gutara, or zaprega.

The most beautifully shaped and widely used tunic, famous from the south of the Balkan peninsula across Southeastern Europe all the way to Front and Central Asia, is the zubun made of white cloth, sleeveless, open in the front, and reaching to the knees. The zubun from Metohija is distinguished by the prominence of the subtly complex geometric patterns alongside the inescapable geometric patterns. They are also represented by the styled embroidered floral motifs, sewed on cloth emblems, as well as tassels and fringes. The zubun was a key component of apparel even for the Thracians, Illyrians, and Slavs. The samples from the 19th and 20th centuries testify to the broad reach of the traditional handiwork on which the effects of the Byzantine and Serbian medieval decorative values were later seen. The traditional costumes from Kosovo and Metohija is also characterized by a long, white, uncut dress with sleeves that is exclusively made of broadcloth. This garment is of Old Slavic origin and was probably adopted by the shepherds who came here from Asia. One of the most basic and characteristic markings of the traditional dress from the eastern part of the ethnically Serbian region is the headdress, primarily a type of braid called trvelji. They are consisted of woolen braids that are woven into the hair or simply bent under the ears.

The male traditional costumes are distinguished by a kind of trousers called čaksire. Čaksire is a garment that was affected by many influences that did not leave a mark on the name of these trousers. Under the Turkish-Oriental influence, čaksire were made with a back and with tight trouser legs from the knee down, while in Metohijan tradition they are seen as tailored pants with an adjustable width to accommodate movement throughout the day.  Crafted with dark, wool fabrics, they reflected the wealth of the owner through the richness of the decorations embroidered with black rope. The short vest known as the jeleče or gunjić came about through the transformation of the zubun in the Turkish period and is one of the most widely worn garments as it can be worn in the winter and the summer. The jelek is a tunic without sleeves, which was maintained to this day.

The FOLK COSTUMES FROM KOSOVO AND METOHIJA exhibition will be open to visitors daily throughout the duration of the festival at the reception of the Mecavnik hotel in Drvengrad, Mokra Gora. 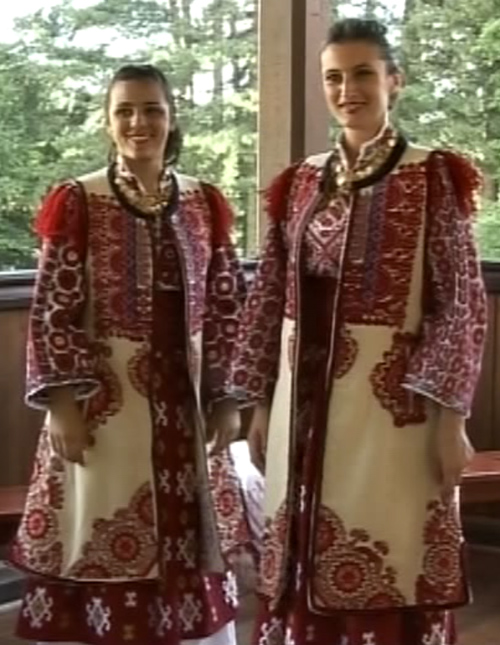